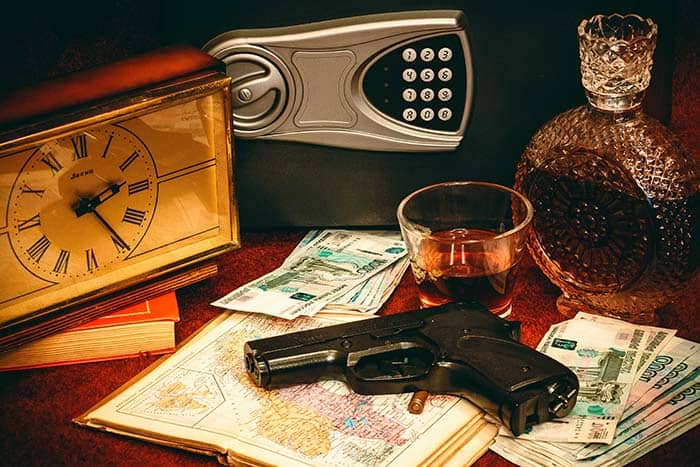 There is somewhat of a contradiction with having a gun in your home since guns are potentially lethal devices, while your home is a place of safety for you and your family. However, there are certain reasons why an individual would keep a gun in their homes and as long as those firearms are legally registered, then owning them is well within their rights.

However, gun storage is a tricky thing because as potentially dangerous items, it is best to keep guns hidden and away from children and even possible burglars. Even with a gun safe, there are certain aspects to consider when deciding where to put it in your home.

Areas to Keep a Gun Safe

Getting to the real question of the hour, there are areas around the house that will be perfect for keeping gun safes hidden and accessible.

This is the first choice of many gun owners to hide a gun safe, especially a little one that can hold only a small sidearm. Typically, you could simply hide a little gun safe in your bedroom anywhere it can fit – you can put it inside your bedside table, attach it behind the bedside table, or even install it under the bed.

Having your guns in the master bedroom is a good choice in terms of accessibility, as well. Especially for those who own guns for defensive purposes, it’s best to keep the guns close by in case of an intruder. For those who have larger gun safes that can hold larger firearms, then the bedroom closet can be the place for you.

Home offices are also a good choice because since it is a place of work, it is not an area in the house that children frequent, reducing the children’s accessibility to the guns.

Things to Avoid in Gun Safe Storage
Gun safes themselves keep your valuables along with firearms safe from unauthorized hands, but you can’t just throw a gun safe anywhere in the house and call it a day. There are other certain aspects to consider where to place a gun safe to effectively keep your guns.

Water and humidity are pesky environmental factors when it comes to gun safe placement because although gun safes can keep people out, it’s not airtight. It’s funny to think that guns are made to withstand tiny explosions within them but cannot handle moisture in the air.

For this reason, it might be best to place a gun safe in the basement because basements generally have a concrete floor. That being said, concrete does not keep moisture and it can hold up the weight of a typical gun safe.

However, if your basement is prone to flooding, then it is definitely not the best place for your gun safe. While you can keep your gun safe on the ground floor, it is not recommended to place it on higher floors due to its heavy weight.

If the room you decide to keep the gun safe is prone to high humidity, then there are a few ways to manage this issue. The typical method is either to get a dehumidifying bar or wand, or to get desiccants.

Desiccants, on the other hand, are chemical substances that naturally absorb water from the atmosphere and these substances can be placed inside the gun safe. If ever you live in a particularly humid area, then get a standard dehumidifier – an electrical device that can lower the humidity of an entire room.

Since fires can technically damage everything it touches, this includes your guns, as well. Guns are complex machines that have parts inside it that can be physically altered in a fire, rendering them broken and even possibly dangerous.

To decide on a room in the house that is less likely to burn, it will be best to avoid putting a gun safe in the kitchen or the garage. Kitchens obviously deal with fire on a daily basis. From the stove to the oven, there are appliances in the kitchen that can possibly start fires. Garages are also prone to fires because they tend to be storage places for fuel. So, either you place your gun safe in rooms not prone to fires, or simply get yourself a fireproof one.

There is an obvious reason why you wouldn’t want your guns accessible to a burglar. If it’s not enough that an intruder got inside your home to steal your valuables, access to your guns significantly increase how dangerous they can be. Theoretically, anyone would prefer to be robbed by an unarmed burglar.

The best place to keep your gun safe away from burglars are rooms that burglars typically don’t go into. Burglars invade homes to steal valuables and rooms that have those are usually the living rooms, home offices, garages and bedrooms.

Basements are a good place to hide a gun safe because burglars do not tend to go into basements. However, you’d want the gun safe to be close to you in the event of a burglary to defend yourself, so a bedroom closet would also suffice.

Gun safes can keep guns away from reach of children and thieves, but they still have to be placed in the right location to protect the guns themselves.

There is more than one parameter to consider in choosing the right location and now that you’re equipped with that knowledge, you are now able to develop a well-informed decision on the matter.

Earnings Disclosure
We may earn a small commission (at no extra cost to you) when you click on a link and purchase a product. How it works?

Back
Widgets on side panel